BUKIDNON NEWS | MANOLO FORTICH | BUKIDNON BLOG – And so it has happened, apparently.

Fr. Venancio Balansag has reportedly withdrawn his graft and corruption case against former Bukidnon First District Congressman and now Presidential Adviser on Environment Neric Acosta and his mother, former Manolo Fortich town mayor Socorro Acosta. According to the Acosta camp, Balansag has withdrawn the complaint and has executed an affidavit of desistance. This means that the perjury case filed against them before the Office of the Ombudsman no longer has basis, according to the Acostas.

The Acostas were accused of allegedly illegally using pork barrel funds (or Priority Development Assistance Funds – PDAF / congressional funds). According to the charge sheet signed by Ombudsman Conchita Carpio Morales, the then Congressman Acosta illegally channeled Php 5.5 Million congressional funds to the Bukidnon Vegetable Producers Cooperative, which happened to be a private institution controlled by his family.

The perjury case stemmed from the allegation that the Acostas made it appear as if the funding program was approved by the Manolo Fortich municipal council which, according to the Ombudsman, “was false, as the accused fully well knew that no such concurrence was given.”

According to this news article, Neric Acosta and Coring Acosta did acknowledge that there was no such municipal council resolution. They pointed out, however, that they allegedly never asserted that there was.

Apart from the perjury case, Neric Acosta and his mother Socorro Acosta are still facing graft and corruption charges as well as charges of violating the Code of Conduct and Ethical Standards for Public Officials. 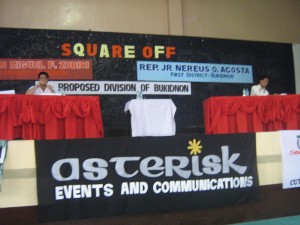 What prompted Fr. Jun Balansag to withdraw the case after several years of fighting for this cause? Fr. Balansag used to be very outspoken against the Acostas and he even often shared his thoughts here on Bukidnon Online.

Did the recent Zubiri and Acosta political alliance have anything to do with this decision? Fr. Balansag is related to the wife of Malaybalay City Mayor Ignacio Zubiri.