Bukidnon anticipates “Love Me Again (Land Down Under)” but… 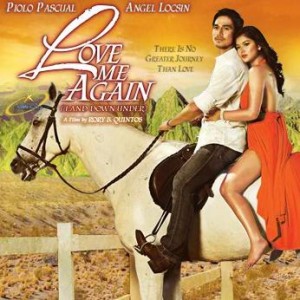 Residents of Bukidnon Province, Mindanao are highly anticipating the showing of the Angel Locsin-Piolo Pascual starrer “Love Me Again (Land Down Under)” come January 15, 2009. However, there’s one catch…

They need to either travel to Cagayan de Oro City (which is roughly 2 hours away from Bukidnon’s capital city Malaybalay) or Davao City (which is about 5 hours away by land) OR wait for the DVD version of the movie (hopefully some won’t resort to buying pirated copies of the film!). You see, there aren’t any movie houses or cinemas in the entire province of Bukidnon.

After the Belyca cinema in Malaybalay City closed down years ago, no other movie house has operated in the capital city of the said province that’s considered the food basket of Mindanao. (I actually remember those days when my relatives and I spent the weekend watching movies at Belyca…wow, that was a lllooonnngggg time ago LOL) The Gaisano City branch in Valencia City (which is about half an hour away from Malaybalay) used to have cinemas but the management discontinued the operations a few years ago as well. (I also had a chance to watch movies in Gaisano Valencia City. I remember the cinemas then were the places “to be seen” or to have dates with your sweetie) So no cinemas in the entire province of Bukidnon – Is that major ouch for solid Piolo Pascual and Angel Locsin fans in Bukidnon or what?!

So ever since the cinemas in Bukidnon closed down, residents have resorted to renting DVDs and VCDs (Video City outlets can be found in both Valencia and Malaybalay) or traveling to Cagayan de Oro City, where the Lim Ket Kai mall, SM Cagayan de Oro, Ororama and Gaisano Mall CDO have cinemas. Of course, we also can’t deny that some of the residents resort to buying pirated CDs — there are a lot of vendors of pirated VCDs and DVDs along Fortich Street in Malaybalay City and within the downtown area of Valencia City — but hopefully this won’t happen especially with the upcoming release of “Love Me Again (Land Down Under).”

The movie, which is reportedly part of Star Cinema’s 15th Year Anniversary celebration, was partly shot in Bukidnon particularly in the Municipality of Impasug-ong, in Barangay Dalwangan in Malaybalay City and in the Kaamulan Tree Park. The movie’s lead stars have also been declared adopted children of Impasug-ong town. Other tales from the movie shoot can be found HERE.

Just in case you fall in love with Bukidnon after watching the film, you can find tips on how to get to Bukidnon here. There are no commercial airports in Bukidnon (there are privately-owned airstrips, though) so you need to start from either CDO or Davao. Don’t forget to read this. And yes, you might want to visit the province during its yearly celebration of the Kaamulan Festival (the festival is actually discussed in the movie). The official schedule of activities of the much-anticipated Kaamulan Festival 2009 can be found in Bukidnon Online.

Read more about the much-talked about Star Cinema production straight from Bukidnon HERE.

So are you looking forward to watching “Love Me Again (Land Down Under)”?