Bukidnon Online noticed two candidates – one running as a Congressman in the 2nd District of Bukidnon and another run running as councilor in Valencia City, Bukidnon -who seem to have good presence in Facebook.

Malaybalay City Mayor Florencio T. Flores, Jr., who’s now gunning for a seat in Congress representing the second district of Bukidnon, seems to have a lot of supporters furiously campaigning for him online. Several “fan pages” have been put up for him and his campaign paraphernalia have been distributed and “tagged and re-tagged” by Facebook friends.

Another online campaign that got our attention is of re-electionist Valencia City Councilor Atty. Oliver Owen “Babba” Garcia’s. Atty. Babba’s poster (found below) has made quite the rounds all over Facebook and Friendster. We also saw this on a few blogs (possibly owned by Valencia City-based supporters) 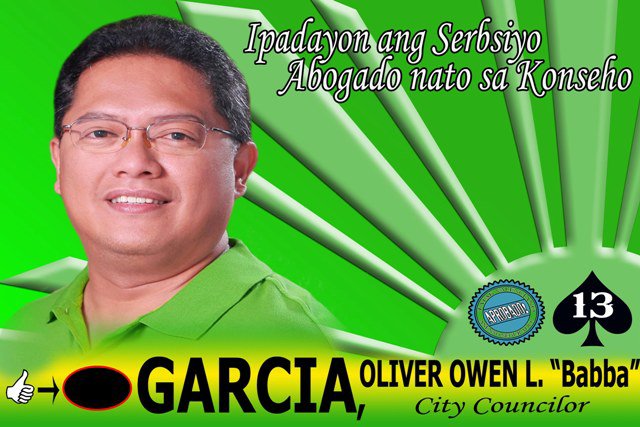 It’s a good thing that our local politicians have started to understand and acknowledge the power of the Internet. Given the more competitive atmosphere in local politics these days, we’re thinking it’s imperative for political candidates to now embrace all means possible – especially the free and easy ones! (blogs can be created for free and Facebook/Friendster/Twitter/Plurk accounts can be opened for free as well) – so that they can have that edge over other candidates.

Do you know of other candidates that have launched their own Facebook campaigns, too? Let us know!