The Province of Bukidnon’s Indigenous People (IP) community can be identified into two ethnical origins – the Manobo and the Bukidnon. 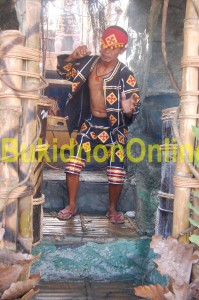 The Bukidnons have distinct physical characteristics. They usually have slight build bodies, slanting eyelets, relatively high noses with lips that range from medium and brown to light skin color. They speak “binukid,” which is distinctive with up and down tones unlike other dialects. The Manobos, on the other hand, usually have Negrito mixtures. The Manobos have small bodies, dark skin, curly hair with broad to flat noses.

Socially speaking, the Bukidnon has lived in the relative flatlands of the Bukidnon plateau and has already adopted Christian ways and has utilized modern technology. Meanwhile, the Manobos live in the mountains and do not want to mingle with the Christians and other people. Beliefs state that the Bukidnons have a more advanced stage of development and have developed their own culture and traditions.

The Province of Bukidnon has seven (7) hill tribes namely:

1. BUKIDNONS. These are considered the “lowlanders,” acculturated Bukidnons who have adapted Christian ways and have utilized modern technology living in the lowlands among Christians.

3. TIGWAHANONS. These are people living along the watershed of Tigwa River and in the Tigwa-salug Valley. They are loud spoken people and the traders among the hinterland ethnic groups.

4. UMAYAMNONS. Umayamnons are highly nomadic Bukidnon Manobos with fine skills in beadwork and brass jewelry. These people live along the watershed of Umayam River. They are reserved and quiet, fair skinned with prominent cheekbones and wear beaded turban without hair.

5. TALAANDIGS. These are people from Talakag who choose to call themselves as such when Panamin took custody of them since September 18, 1975. The women of this tribe are expert embroiderers and patchwork makers. They are semi-sedentary in moods of living.

6. HIGAONONS. Higaonons normally settle in the provinces of Agusan del Sur, Misamis Oriental and Bukidnon. Planting of rice, corn and vegetables is their main means of living.

7. MANOBOS. These people are natives of the municipalities of Pangantucan, Kalilangan and Kadingilan. These speak a quaint archaic language of their own which cannot be understood by the lowland Bukidnon and other ethnic groups in the province. Others live in the municipalities of Don Carlos, Kitaotao, Kibawe, Quezon and Damulog.

COPYRIGHT NOTICE: This is original work. Copying without permission is not allowed. You may send a message to Bukidnon Online if you want to use this. You may only repost, reuse or redistribute this article if Bukidnon Online provides written consent.