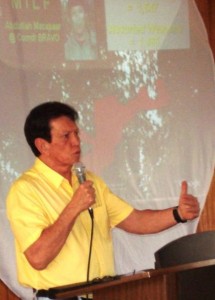 Bukidnon Governor Jose Ma. Zubiri, Jr. reportedly endorsed Defense Secretary Gilbert Teodoro as his Presidential bet for the 2010 Philippine elections. And in a province where Zubiri’s allies have rarely been defeated, will Bukidnon voters listen?

According to sources, Zubiri made this bold proclamation during the recently concluded 8th Mindanao Island Conference of the The Provincial Board Members League of the Philippines, which was held in Malaybalay City, Bukidnon.

Teodoro, according to national reports, have been identified as a “potential LAKAS standard bearer.” This, amid talks that Zubiri’s son, former Bukidnon 3rd District Congressman and now Senator Juan Miguel Zubiri, set a deadline for Vice President Noli de Castro to decide whether or not he’s interested to get LAKAS-CMD’s support for the upcoming presidential elections.

The younger Zubiri, who serves as LAKAS-CMD’s secretary general, said that the party may opt to no longer wait for De Castro to make a decision since the party also needs enough time to prepare and to finalize their line-up.Presidential Management Staff (PMS) Chief Cerge Remonde even said that Teodoro has showed “interest” and that “we (Malacanang) will not be surprised if pretty soon lalabas na rin ang pangalan ng ating Defense Secretary Teodoro.”

What do you think of these developments?