Economy and Geography of Bukidnon

Bukidnon economy and Bukidnon geography. The province of Bukidnon is situated in Central Mindanao. It is a landlocked area that thrives from its rich agricultural lands. 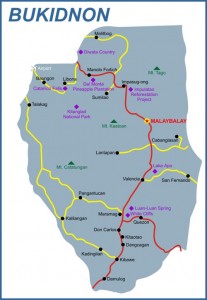 Land and water forms
The area is predominantly on a high plateau with an average elevation of 915 meters. Bukidnon’s terrain mainly consists of the deep canyons of Cagayan, Polangui and Tagoloan rivers. The Cagayan and Tagaloan rivers empty into the Macalajar Bay while the Polangui river unites with the Rio Grande in southern Cotabato. Its highest peaks include the Mt. Kalatungan, Mt. Tankulan, Mt. Dulang Dulang and a dormant volcano called Mt. Kitanglad. For the most part, the province is rolling grassland that makes it a great site for agricultural industries.

Economy
The rich soil and the evenly distributed rainfall make for a good combination for farming which is Bukidnon’s main source of livelihood. More than ninety-five percent of its population lives on farming. It is the country’s main producer of pineapples. Major canning companies such as Del Monte Philippines, Inc. and Dole Philippines have set up main manufacturing sites in the province. Aside from pineapple, Bukidnon is also considered one of the country’s major suppliers of rice, sugar, coffee, rubber, tomato, flowers and a wide variety of fruits and vegetables; hence, the title Mindanao’s food basket. Due to its predominantly cool weather, the province is also a major producer of flowering plants which are exported or distributed for sale in nearby provinces.

The province has always been known to produce export-quality agricultural products since time immemorial. To date, Bukidnon is the second largest producer of corn in the Philippines. It has constantly remained a leading supplier of other agricultural produce both in the country and abroad. The province has created trade relations with neighboring countries such as Japan for rubber in particular.

Aside from farming, Bukidnon is also a major supplier of poultry products, hogs and cattle. Major food manufacturers such as San Miguel Foods Corporation, Monterey Farms Corporation and Swift Foods Corporation have set up breeding sites in the province. The province is also home to various agri-businesses including the production of handicrafts made of rattan, bamboo and wood. Bukidnon is now a known exporter of furniture, woodwares and other souvenir items that are unique to the area. These days, the provincial government is also trying to develop the production and exportation of rubber boots and shoes.

For more information about the beautiful Province of Bukidnon, Philippines and of the numerous available business opportunities, fascinating culture and to be able to interact with locals, log on to Bukidnon Online (http://www.bukidnononline.com) The site is hosted and maintained by Asterisk Events and Communications (http://www.asteriskeventsandcommunications.com)

COPYRIGHT NOTICE: This article is ORIGINAL and is wholly owned by Asterisk Events and Communications and by Bukidnon Online. This article is also protected by copyright software. You are NOT ALLOWED to copy any part of this article without the expressed consent of the owners. Contact bukidnononline (at) gmail (dot) com (email address) to seek permission.

One thought on “Economy and Geography of Bukidnon”