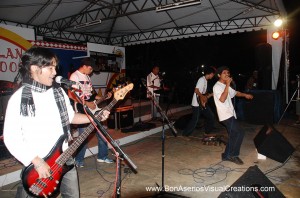 MALAYBALAY CITY, BUKIDNON – Another band has earned the right to compete in the grand finals night of the Kaamulan Jam 2009 Lock and Load Battle of the Bands. Malaybalay City-based band “Eruption” won in last night’s fourth elimination round held at the Capitol Stage, Capitol Grounds, Malaybalay City, Bukidnon.

Event organizer Engr. Bobby Azura said that nine bands were supposed to perform last night. However, Kisolon-based “Hyteria” band did not show up. “Sinister” band, meanwhile, was disqualified because one of their members already played for another band earlier this week. Event rules and procedures state that performers should only play for one band during the entire 5-day competition.

“Sinister” band still had the chance to “jam” last night, however. The said band sang two songs on stage.

Tonight, Friday, February 27, 2009, the last batch composed of 9 bands will see action at the Capitol Grounds. Bands from Cagayan de Oro, Davao City, Manolo Fortich, Valencia City, Quezon and Iligan City are set to compete for the last slot which will earn them the right to compete in Saturday’s grand finals.

The list of the competing bands may be found HERE.