Kaamulan Festival 2009 to kickstart on February 18 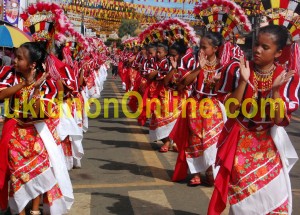 MALAYBALAY CITY, PROVINCE OF BUKIDNON – The much-awaited Kaamulan Festival 2009 celebration is set to begin by February 18, 2009. This, according to the tentative schedule of activities furnished to Bukidnon Online by the Provincial Tourism Office.

The Kaamulan 2009 celebration is also set to end by March 10, 2009, the same day the Province of Bukidnon is set to celebrate its 92nd Foundation Day.

During the soft opening on February 18, various activities such as Garden Show, Food Fest, Bazaar, Agri Fair and Livestock Show will be held at the Capitol Grounds in Malaybalay City. Various bands will also hold performances in the evening at the Capitol Stage.

The full list of performing bands will be posted here in BUKIDNON ONLINE.

The full, official schedule of this year’s Kaamulan Festival 2009 celebration will be posted here in BUKIDNON ONLINE.