Kaamulan Jam 2009 “Lock and Load Battle of the Bands”

In consonance with the celebration of the Kaamulan Festival 2009, a huge event dubbed “Kaamulan Jam 2009 LOCK AND LOAD Battle of the Bands” will be held from February 23 to 28, 2009 at the Capitol Stage, Capitol Grounds, Malaybalay City, Bukidnon.

All genres are welcome!

* One qualified band will be chosen per night and will receive P1,000.00 cash and will move on to the finals * 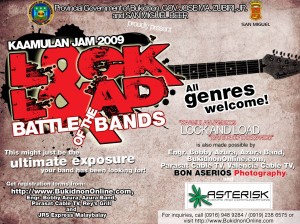 One week of powerful band performances all at the Capitol Stage, Capitol Grounds, Malaybalay City, Bukidnon

This might just be the ultimate exposure your band has been looking for!

To enter, just download a copy of the registration form from:

or get forms from Parasat Cable TV, Rey’s Grill and BBQ and JRS Express Malaybalay

Personal submission of forms is REQUIRED

Call the numbers below to schedule your submission

Interested participants will be required to prepare five (5) songs although only three (3) of those will be sung during the competition. The other two choices are for leeway purposes only.

Names of the qualified bands will be revealed by February 17, 2009