Rowell “Roy” Ucat, also known online as “Medyo Maldito,” is officially a part of a web TV reality program in Malaysia. Ucat, born and raised in Malaybalay, Bukidnon, is the Philippine representative to “The Amazing Sunway City Challenge,” which is run by the Sunway Group and which targets 54 million viewers across the world.

Medyo Maldito or Roy Ucat is one of the 10 social media influencers tapped to participate in this web TV reality series, which will begin airing in February 2019. The other influencers represent Malaysia, Singapore, Taiwan, India, Indonesia, Thailand, Egypt, South Korea and China.

Accordingly, the total number of followers of all the 10 influencers is about 25 million. This, according to Sunway CEO Chan Hoi Choi, can help boost Sunway City’s reputation as a prime tourist location.

Among the challenges that the influencers will participate in are sliding at the Vuvuzela waterslide and riding the surf pool at Sunway Lagoon.

Multi-awarded Filipina blogger and professional social media specialist, Mindanaoan, was invited as a speaker during Malaysia Social Media Week 2014 and stayed at Sunway Pyramid Tower Hotel, which is in the same complex as the Sunway Shopping Mall, Sunway Resort Hotel and Sunway Lagoon Waterpark and Surf Beach. Read all about her experience. 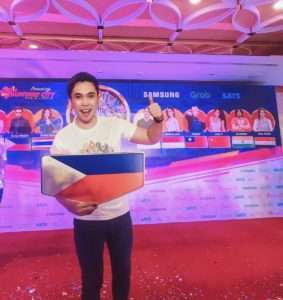 Rowell Ucat a.k.a. Medyo Maldito attended school in Malaybalay. Before he became an online star, he worked as a manager of a Japanese restaurant in Singapore and also worked in Cebu. He co-wrote the Visayan Pop hit, “Hahaha Hasula,” and appeared in a movie dubbed “Magbuwag ta kay.”

Interestingly, Malaysia and Malaybalay also share a special fact. In 2011, the then-Malaysian Ambassador to the Philippines became the first ever ambassador in history to witness the Kaamulan Festival.

(All photos courtesy of Medyo Maldito)