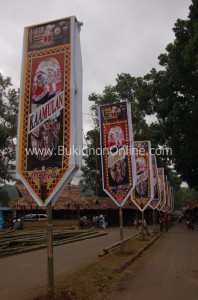 MALAYBALAY CITY, BUKIDNON – Two bands have already bagged two grand finals slots in the ongoing Kaamulan Jam 2009 Lock and Load Battle of the Bands. These bands are now qualified to vie for the top prize of P25,000.00 this coming Saturday, February 28, 2009 at the Capitol Stage, Capitol Grounds, Malaybalay City.

The band “Native In Town,” members of whom hail from the Municipality of Kitaotao, Bukidnon, won during the first night of the competition. The second band which landed a place during the finals is the “Karcinoma” band from Malaybalay City.

Both bands received P1,000.00 cash and now have the chance to compete in the much-awaited grand finals night of the Kaamulan Jam 2009 Battle of the Bands.

Twenty eight (28) more bands are set to see action until Friday. Everyone is invited to watch the ongoing Lock and Load Battle of the Bands competition of this year’s Kaamulan Festival.