A FIRST IN THE HISTORY OF BUKIDNON: Malaysian Ambassador witnesses Kaamulan Festival 2011

Malaybalay City, Bukidnon – The Ambassador of Malaysia to the Philippines, Dato Seri Dr. Ibrahim Saad, was in the Province of Bukidnon for a 3-day private social visit to witness the recently concluded Kaamulan Festival 2011. The Malaysian Ambassador’s presence was a first in the history of Bukidnon as Dr. Saad was the first ever ambassador who came and witnessed what was largely regarded as the country’s only authentic ethnic festival. 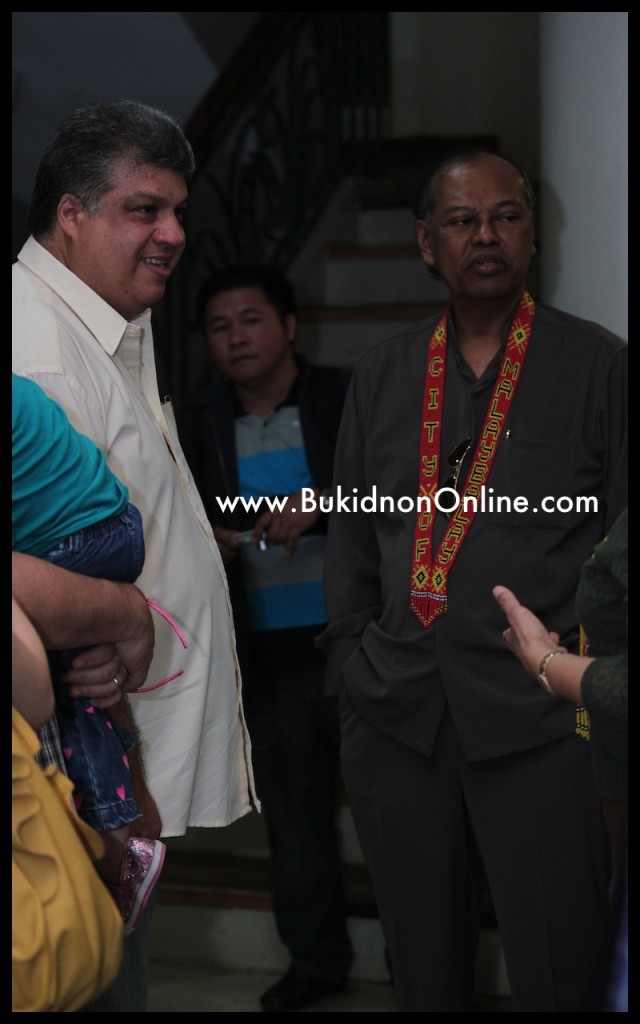 Dr. Saad was joined by his wife, Datin Seri Dato Zainab Kader, the First and Third Secretaries of the Embassy of Malaysia in Manila and their respective wives plus the Vice Consul from the Consulate Office of Davao.

Senator Juan Miguel Zubiri and Malaybalay City Mayor Ignacio Zubiri welcomed Dr. Saad and the rest of the Malaysian delegation upon their arrival. Malaybalay City councilors, department chiefs and representatives from various sectors of society were also on hand to welcome the party. “All of us are extremely proud to have you here,” Senator Zubiri said.

Mayor Zubiri, for his part, even jested that since Malaysia and Malaybalay share the same two first syllables, then the constituents of both areas are “connected” and are “soul brothers and sisters.”

“Your presence here is a testament of how peaceful our city is and how God fearing our city’s people are,” Mayor Zubiri stressed.

After the dinner, Dr. Saad and the two Zubiris exchanged tokens as symbol of unity and friendship between Malaybalay and Malaysia. The entire Malaysian delegation then went to the Kaamulan Open Theater to watch the Piniliyapan Hu Bukidnon or Night of Bukidnon dances show. VIP seats were reserved for all of them. Bukidnon Governor Alex Calingasan and some provincial government officials were on hand to welcome the Malaysian Ambassador and the rest of the party.

Meanwhile, on the second day of the visit, the entire Malaysian delegation witnessed the Kaamulan Festival 2011 Ethnic Street Theater and Float Competition from the main gate of the Bukidnon State University, where he met and watched the event alongside University President Dr. Victor Barroso, as well as from the Capitol Stage at the Capitol Grounds, where he met the Bukidnon congressmen, board members, mayors and vice mayors.

Dr. Saad was also requested to assist in the awarding of major prizes. Dr. Saad and the entire Malaysian delegation also spent time with BSU students and also had a brief meeting with Barroso. The Malaysian ambassador was pleased to learn that several Malaysian students were currently in BSU to do social work.

During the ambassador’s 3-day private social visit, he was also able to visit the Transfiguration Monastery and several booths on display at the Capitol Grounds.

Apart from ASTERISK Events and Communications, Bukidnon Online and Mindanaoan also made it possible for an ambassador to visit the Province of Bukidnon during Kaamulan season for the very first time.

The private family who also invited the ambassador and the rest of the Malaysian delegation also extended their heartfelt thanks to these people who assisted them.

4 thoughts on “A FIRST IN THE HISTORY OF BUKIDNON: Malaysian Ambassador witnesses Kaamulan Festival 2011”