BUKIDNON NEWS – As if to solidify his being the “real” and “official” candidate of the Liberal Party (LP), Engr. Wenifredo Agripo, Sr. officially filed his candidacy for the congressional seat of the second district of Bukidnon today, November 28, 2009 at the Bukidnon office of the Commission on Elections (COMELEC).

Along with his wife, children and other LP local candidates, Agripo filed his certificate of candidacy (COC) at around 10:40 a.m. today.

In an ambush interview before his official filing, Agripo said in vernacular that “today, we prove that I have the blessing of not only the provincial LP head but also of the entire party. I am the real candidate of the Liberal Party. People should not be confused.” 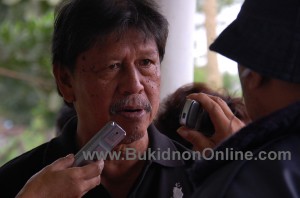 Two years ago, during the Kaamulan Festival, he announced his support for former Senate President Manuel Villar. Early this year, meanwhile, during the same festival, he called Sen. Loren Legarda “the future President” of the Philippines.

As of press time, Zubiri’s allies tell Bukidnon Online that they still “do not have a party as of the moment.” Reports of Zubiri and his allies “being banned” from entering LP have been swirling around. Read related story here.

For more Bukidnon news and updates, SUBSCRIBE NOW (CLICK THIS)! Free updates sent straight to your inbox! Don’t forget to VERIFY your email address by checking your email and clicking on the link sent to you. Thank you!

3 thoughts on “Agripo files candidacy for congressman, says he represents “the real Liberals””