MALAYBALAY CITY NEWS – Although there have been talks that he may be considered for the congressional post in the second district of Bukidnon, not a few were still surprised when incumbent Malaybalay City Mayor Florencio T. Flores, Jr. officially filed his certificate of candidacy (COC) today, Wednesday, November 25, 2009 at the Bukidnon Commission on Elections (COMELEC) office.

Flores, now on his third term as the city’s chief executive, will run for congressman under the LAKAS-KAMPI party.

The attending COMELEC officer, however, told Bukidnon Online that they still need “supporting documents” from Flores before they can consider him as the party’s official candidate for the Bukidnon 2nd District congressional seat. Supporting documents include written and official party nomination.

“We will wait until 12 midnight of December 1. If we don’t receive the supporting documents, then we will consider him as an independent candidate,” Bukidnon Online was told. 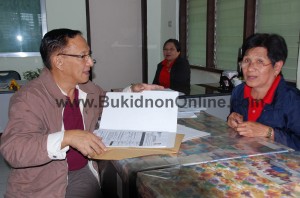 Bukidnon Online has yet to get comments from Zubiri and other former partymates.

Flores arrived at the provincial COMELEC with some selected friends and supporters. Bukidnon Online was told that Flores announced his final decision yesterday.

When asked what made him decide, Flores told Bukidnon Online that he aims for “service in a bigger area of coverage.”

Many speculated that Flores will run for vice mayor. A lot of political parties have offered Flores support, to which he himself confirmed with Bukidnon Online.

“I have received several offers but I have not made my decision yet,” Flores last told Bukidnon Online Monday.

With Flores’ inclusion in the congressional race, it will be one full battlefield of sorts come May 2010. So far, apart from Flores, Engr. Wenifredo Agripo, Sr. (Liberal Party), Joan Dichosa (Independent) and Fernando Carrascoso (Independent Party) have already filed their COCs. All will run for Bukidnon 2nd District representative. (MISA/Bukidnon News)