SPORTS | BUKIDNON PERSONALITIES | NEWS | MALAYBALAY CITY – Well it looks like Francis Casey “Nino” Alcantara is still doing great and still making waves in the international tennis scene. You may recall Alcantara to be the first ever Filipino Australian Open champ. He was even commended by the Senate via a resolution.

Nino, as he is fondly called, is the son of a Bukidnon native. His mother, Sarah, is from Malaybalay City, Bukidnon. Alcantara lost his father 6 years ago due to cardiac arrest.

Anyway, after his big Australian Open success, Alcantara seems to still be doing pretty well in the international tennis scene. Just recently, Francis Casey Alcantara managed to stay until the semis of the 51st Trofeo Bonfiglio in Milan, Italy. Alcantara has a new partner in the person of John Morrissey of Ireland.

In the local tennis scene, Alcantara managed to bag the Mitsubishi Lancer International Juniors Championship a few months ago. His partner then was Filipino American Raymond Sarmiento. 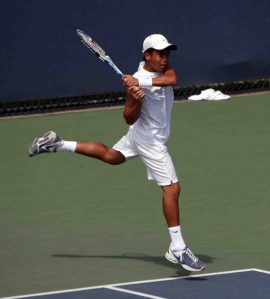