Former Bukidnon 2nd District Congressman and now Senator Teofisto “TG” Guingona III recently invited BukidnonOnline.com / Mindanaoan.com to personally witness the signing of the Open Budget Partnership Agreement during a forum on the 2011 National Expenditure Program. The Office of Sen. TG Guingona made it possible for me to attend the very important forum in Manila, which was held last Saturday, November 20, 2010.

And can I just say that it was an honor to still be recognized by the senator? I haven’t seen him in years and I’m pretty sure he has met a million people since winning in the last May elections but he still recognized me. While I was waiting by the elevator, he arrived, saw me and without doing so much as batting an eyelash, called me by my first name! I thought that was pretty cool. Thank you, Senator TG.

So anyways, last Saturday’s open budget forum was really quite an eye-opener for me personally…and I hope to help educate you, my dear readers, about the importance of transparency and accountability especially with regard to our country’s budget. I also agree with Senator TG when he said that the budget process must also be “participatory” – meaning that you and I must have our “say” with not only how the national budget must be spent but how it must also be increased, managed and disclosed.

During the forum, Senator TG Guingona said: “Today, we are witness to a historic event, when the government and the civil society join hands in safeguarding one of the most important processes in good governance – that is, making sure that the budget process will be truly crafted in the true essence of democracy, one that will benefit the people whose taxes make this country run.”

The Open Budget Partnership is a collaborative initiative among the Executive through the Department of Budget and Management, Congress through the Senate Finance Committee and the House Committee on Appropriations, civil society groups, professional organizations in finance, accountancy and budgeting, academic institutions, and international development agencies to bring good governance to the government budget process. 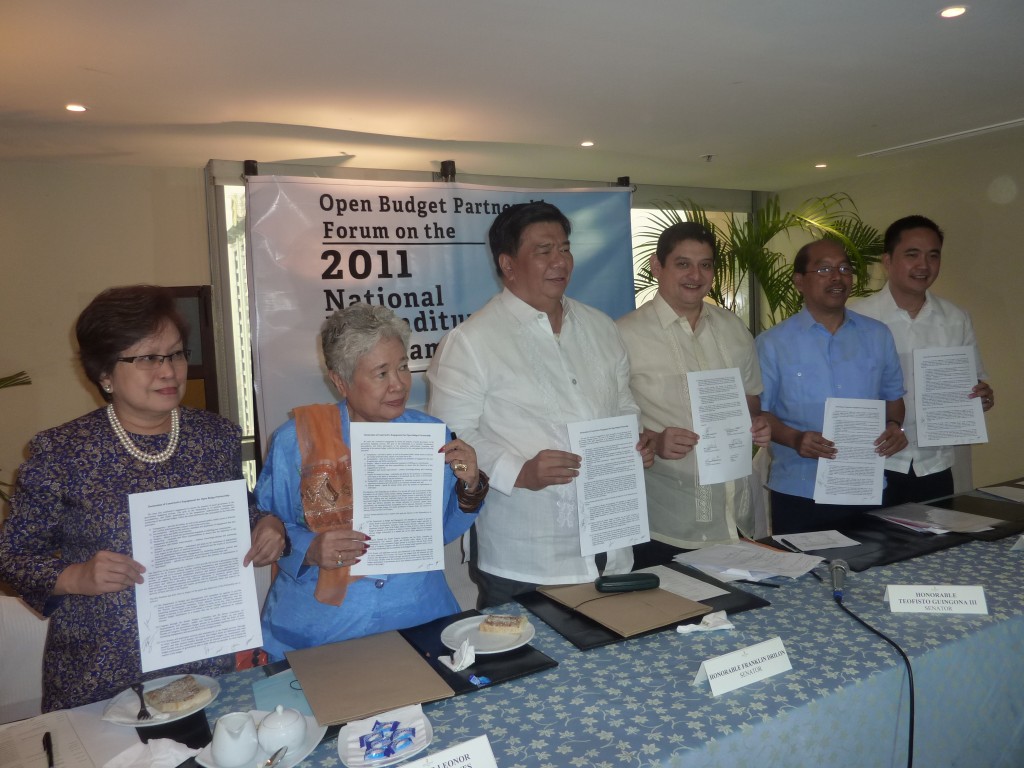 * photo taken by www.Mindanaoan.com (declared one of the best blogs by the Philippine Blog Awards 2010)

As lead convenor of the Open Budget Partnership, Sen. Guingona led the signing of the covenant, together with Sen. Franklin Drilon and Rep. Emilio Abaya representing the Legislative department in their capacity as chairpersons of the finance committee of the Senate and House of Representatives, respectively, and Budget Secretary Florencio Abad representing the Executive and leaders of various civil society groups.

“The Constitution guarantees the people the basic right to be informed on matters of public concern. Pursuant to this and subject to reasonable conditions prescribed by law, the State should therefore always endeavor to adopt and implement a policy of full disclosure of all its transactions involving public interest especially those matters that go into the very fiber of government operations and have the most impact on the lives of every citizen – matters like those pertaining to the appropriation of the national budget and the expenditure of public funds”, Sen. Guingona pointed out.

“We enter into partnership to ensure the practice of good governance in the government budgeting process. The goal of the partnership is to promote transparency, accountability and participation in the preparation, authorization, execution, and monitoring of the national budget and thereafter of agencies and local government budgets,” he added.

Guingona said partnership aims to provide full access to budget information for all thereby enabling transparency and accountability in the budget process and to increase the capacity of all to understand the budget process, its enabling laws and established practices, as well as its implications on policy and impact on programs.

“When access combines with understanding, meaningful participation follows. By increasing meaningful participation in the budget process, the partnership will help to improve the budget process in terms of effective allocation and efficient utilization of resources, greater fiscal responsibility, and increased personal accountability thereby also improving the delivery of basic services funded by the budget,” explained Guingona.

The solon stressed that even with access, it is still imperative to develop the capacity to understand the budget.

“Only when access to information is combined with the capacity to understand that information will it be possible to have meaningful participation by all in the budget process. The hope of this initiative is to create a basis for good governance in the budget process and, by that activity, to direct the government budget to serving the public whose taxes enable it,” Sen. Guingona stressed.

Guingona has been actively pushing for genuine reforms in the budget process which, according to him, should prioritize social services while doing away with unnecessary and vague allotments.